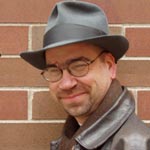 Chris Garlock is the Union Cities/Street Heat Coordinator for the Metro Washington (DC) Council, AFL-CIO, and the Director of the DC Labor FilmFest. He’s built one of the largest mobilization databases of any Labor Council or State Fed in the country, and more than 10,000 activists and supporters receive daily weekday updates on the metro-area labor movement via the award-winning UNION CITY ezine. He organizes the annual DC Labor FilmFest, one of the only labor-themed film festivals in the world, founded in 2001 to screen films by, for and about work and workers. Garlock has also worked as a radio producer for populist Jim Hightower, Coordinator of the Rochester (NY) Labor Council, and as a reporter, editor, columnist, radio commentator, as well as dishwasher, prep cook and chef (he’s a volunteer cook twice a month at Miriam’s Kitchen). A strong amateur go player, Chris edits the American Go E-Journal, the largest English-language publication about the game of go, with nearly 13,000 readers worldwide. He lives in Takoma Park, Maryland with his wife Lisa, an art therapist, his son Benjamin, a music producer and their cat.